My first impressions on Superman 64…

So I was at the Scotland Comic-con today, and found a copy of Superman 64 for sale.

So I thought, what the heck? I’ve enjoyed some “shitty” games in the past, so maybe this will be the same. It’s a late 90s polygonal game, it’s right up my alley! I don’t mind going through rings so long as the rest is okay.

So I went home, set up my Nintendo 64 and stuck the game in. 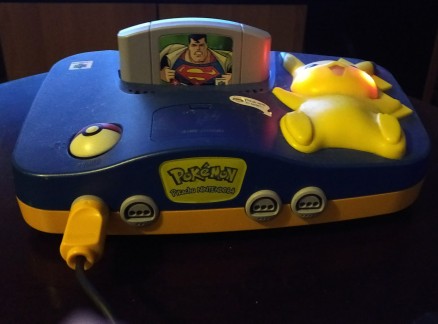 I expected the game to either be not as bad as people say, or so bad, it’s awesome! Every bad game I’ve played has fallen into one these categories.

This game, however, is neither… it is dreadful! One of the very few games I actually hate! Everything they say about the game… it’s true… very true…

The controls are fucking atrocious, it is too sensitive, you cannot change them, and there’s a lot of lag in them!

And every time you conplete the rings and fail the challenge, guess what? You have to go through the fucking rings all over again!

but this…. THIS! This is truly garbage! This deserves every crticism it recieves!

Although… it isn’t entirely Titus’ fault that this happened, WB were kind of dicks to them, being unecessarily strict with what Superman can and can’t do, and Titus even went as far as to reference Superman comics to prove them wrong on some occasions, such as the idea that Superman won’t fight or kill people in the real Metropolis, “requiring” a virtual one be made, or something. I would link to the video I heard this from, but my site blocker has blocked my sites for the night… damn offline commitment!

Titus aren’t entirely in the clear, after all, they have lied about their own game prior to release on a few occasions, but I guess this teaches us one important lesson… WB were horrible back then… and they’re horrible now! (See: Batman Arkham Origins, Batman Arkham Knight, Mad Max, Man of Steel, Batman v Superman, Suicide Squad and more…) Why do people, myself included, keep buying their products?

If they hadn’t had such massive IPs such as Looney Tunes, Anamaniacs and all the DC heroes they acquired when buying DC comics, they would have gone bankrupt long ago… long ago!

I never thought that I would ever say this… but please… don’t buy this game… save your money! Do something more useful with your money… like burn it… or flush it down the toilet… or buy shit on Amazon, I don’t know…

Will this stop me from attempting to play through the game? Probably not. I am kind of machochist when it comes to things like this, I guess, and also my conscience deminds I finish what I start, and I have started something I shouldn’t have… playing this game, that is… in case it wasn’t obvious…

My Thougts on The Room (Spoilers)

In all seriousness, this film was… interesting, to say the least.

To say the film was awful I don’t think is quite accurate.

Yes, the acting was bad, awful, even. Yes, the writing was all over the place. Yes, it has Tommy Wiseau. Yes, the theme song was overused

But it was… enjoyable.

The film does have qualities that I do unironically enjoy, for example, (oh yes, I forgot, SPOILERS!) When Johnny Wisaeu (YES I KNOW THAT ISN’T HIS NAME, BUT IT FITS!) goes insane and shoots himself in the ends, I felt his pain, we wanted to slap Lisa in the face for what she did!

Some of the actors were very good, like the man who threatened to kill a child over drug money, he was a genuinely good actor, it almost felt out of place…

Lisa’s mother, the one with breast cancer, was also pretty good, but not good enough to be out of this place in the film…

That’s all I can positively say unironically about the film.

Everything else was terrible, it was poorly directed, poorly written, poorly thrown-together, it was clearly made by an alien who has no idea how humans interact… either that or he’s actually from a foreign country whose culture differs greatly from countries that speak an Anglic language… yeah, that’s probably it.

However, it’s the perfect blend of bad, and it makes for an awesome experience!

Seriously, everyone needs to watch this! I am not saying this for a joke, it provides an experience unlike anything you’ve ever seen before! After all, they say that looking for experiences in life is the way to a happy life…

So what have we learned from this? Watching the room leads to happiness! Seriously, watch this! Don’t torrent or stream it, buy the DVD or Blu-Ray, you need this in your life!

Now that I’ve experienced The Room, time to listen to The Disaster Artist…

Last Sunday, I watched The Cat Returns, on which I have shared my thoughts here.

I have been watching a lot of videos about the rise of the Simpsons and how it’s become the zombie like state it is today, and it’s gotten me back into the series, and have decided to watch season 1-8 (Season 9 is said to be when it started to really go downhill), and I’m going to try and get the DVDs for each season when I can!

My thoughts on WATCH_DOGS 2

I just finished WATCH_DOGS 2, so I decided, while it was fresh on my mind, to share my thoughts on the game and how it compares to the first game.

I want to get something off my chest first: you Ubisoft for making the PC version so difficult to find! The only way I could get this game physically on PC was if I bought the big San Francisco edition, which were hard to come by, and the prices kept fluctuating from expensive, to bank breaking!
I managed to get myself a copy in the end, though. Here is my copy! 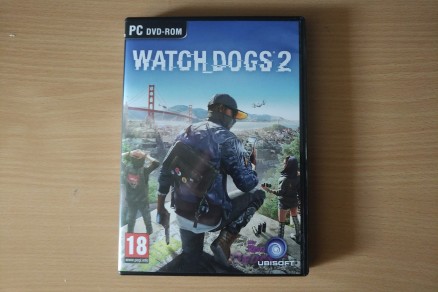 Also, for some strange reason, it’s on 4 discs, but only uses 3 of them when installing…

Anyway, how is the game itself? Well, to me, it’s the same gameplay as the first game, only the car physics are better (seeing that reflections worked on them, you’d hope so!) and it relies more heavily on RC devices such as drones, because they’re all the rage these days…

The story seems more bland and generic this time. Say what you want about Aiden Pearce, but at least his character has depth, he had another thing that is driving him forward, that is to revenge his neice’s death.

This new guy? He has nothing, just “Hey! Let’s hack CtOS!”, and the other characters are like “Yeah! Let’s!”, and that’s that.

All of the good guys seem to be there just to make sure that Ubisoft doesn’t offend anybody, and seemingly with the exception of one, doesn’t bother making them interesting characters with real backstories.

You have: Black man, White man, Woman, Black man with dreads, and Autistic.

The Autistic guy is the only one with a personal reason to do what he does, CtOS has been around with his social support and whatnot.

So it’s for these reasons, I prefer the first game, I prefer there to be a real story. I have no reason to root for the good guys. They have no real motive to do what they do, other than to just do it for the sake of doing it!

However, from what I hear, this was the reason people prefer the second game, they wanted more focus on gameplay… fair enough I guess.

There are some really enjoyable missions in the game, others less so, and some side missions covering topics I find very disturbing.

Over time, though, they just started to feel a little samey, even the stealth sections, which is what I loved about the first game, eventually got boring for me. Only towards the end do you really get the interesting missions, but for the most part, the game’s missions and story are pretty forgettable in my opinion.

I’m also going to point out that the puzzle sections where you have to make sure there’s a connection from start to end, you know the ones, are ruined in the second game! Instead of simply rotating the camera in a otherwise empty area, you have to look for all the connections in the room you’re in, walking about and such, and it was just frustrating!

A blog documenting my gaming life.